skip to main | skip to sidebar

I love Alan Grayson's emails.  He's one of the only people that's telling it straight on the national scene.  Here's one I got today:


Last week, one of my opponents put out an ad saying that if I'm elected, then next year, I will triple gas prices, prohibit guns and ammunition, and close down children's lemonade stands.

I assured him that I would not do any of those things. Nor would I remove the tin foil from his skull.

That made me think of some more things that I probably won't do next year:

USA: Collective imbecility: Too many screens and vehicles: Inability to see the most obvious causes and effects = Lack of realization that these many massacres, and other killings that don’t make it into the national news are the result of:
Easy access to weapons that destroy life with the press of a button
and
yes, a culture of violence mainly propagated by mass/immersive media
Posted by Christian Asplund at 11:26 AM No comments:

I’m getting a lot of desperate emails from the Democratic Party, democratic candidates and progressive groups requesting money and reporting some scary data about outspending by republicans.  It does scare me that they are so scared.  It does seem like the supreme court’s ironically titled “Citizens United” decision has opened the way for a Putin-style power grab by a somewhat unpopular and quite destructive and nasty republican party.  I have probably been dwelling on this theme too much over the past few years.  I love America so much and it is so sad to see everything that is good here squandered in such a sad way.  But here are a few thoughts:

1. The emails I get from the aforementioned liberal voices feel like too little too late.  Democratic politicians have been so consistently weak, even in the face of great advantage and victory, that it is hard to really want to dash to their aid.  I’m just not sure what they are going to do with my money.  Furthermore, I can’t figure out how they can’t defeat a party that blatantly and openly voted to eliminate Medicare two years in a row, not to mention many other things that would seem to be great political gifts.  And once they get elected, they behave even more weakly.  They don’t seem to realize that they do have an effect on the discourse.  If they assent to the whole libertarian hogwash, then all they are to us is pale republicans who have only vestigial concern for the wellbeing of the non-rich, but no will to do anything about it.  “Sure government doesn’t create jobs, but could we use it to create just a few jobs, please?  No, ok, well, could we do a few less bad things, please?”

2. I’m not sure I get the whole republican thing.  What is the end game?  Can anyone tell me?   Is democracy really that loathsome to them?  I don’t see a dictator or strongman behind this whole thing; so it just seems like mass hysteria in the direction of how jerky can we get away with.  But oh how many people are hurt by their policies.  I guess because they’ve set themselves mainly as opposed to anything from the democrats, and the democrats cave so much that the republicans have to be ever nastier and meaner to find anything to decry about the democrats.

It’s all kind of like watching a very slow rockslide or something.  I’ve watched this decline (of both parties, public discourse, the well-being of most Americans) happen for almost 20 years, and I kind of knew what was happening, but at each turn I think the next thing isn’t going to happen.
Posted by Christian Asplund at 10:43 AM 3 comments:

Hung out with piano virtuoso Keith Kirchoff last week who completely rocked most of my piano pieces last summer in an epic recital and even more epic recording sessions. Here we are up Rock Canyon 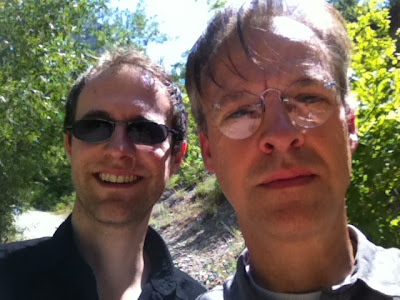 After church today I went on a solo hike up said Canyon, further than I think I've been thus far. I finally got to some stream. 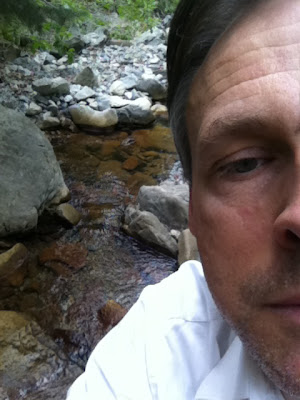 Last summer the stream went all the way down to the parking lot and lasted through July, because of the massive snows, rains and cool spring and early summer temperatures. We went a lot and played in the stream, which is, to me, sublime. I just love streams for some reason. Today I found some stream above where I think it gets piped. I think when there is stream below this; it is overflow from the pipe. There was hardly anyone around. It was quite hot, a Sunday, and the air is really bad from the many wild fires. I was so taken by the quiet, and the beauty of the whole canyon, the rock formations, the vegetation, the fauna. I found a rock to sit on in the stream and watched a small colony of millipedes, and then watched various spiders with webs just above the water. The affinity I felt with the arthropods going about their business in this beautiful, gentle setting. I think it is a human need to connect with our fellow living things in their natural habitat, and to nature in general. Rock Canyon is characterized by many rocks of various sizes. Geological processes, especially folding are very evident. Even the rock seems to have a life force. Today I discussed with a friend who works for FARMS the Liahona, as he had a plastic one like the Arnold Freiburg. I asked him why replicas always look the same. He said that Freiburg set the mold. But then I pointed out that Minerva Teichert has one that's more elegant, that just looks like a large gold ball. Seems more like the stone mentioned in Revelation and D&C (speaking of living rocks).
Posted by Christian Asplund at 9:04 PM No comments: